EFT is a simple and effective form of meridian energy therapy. Some call it “emotional acupuncture” but without the needles. You may not have heard of it, and it looks weird. The good news is... it works!

We will be tapping with our fingertips on certain key power points on the body. While tapping, we will state a truth about how we feel along with a positive affirmation. If you are new to EFT, look at the chart below and follow along through each point. 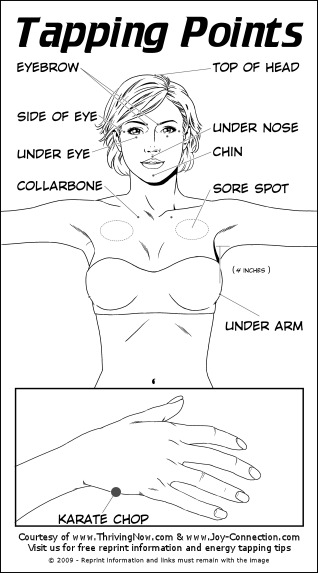 Now return to the top of the head to help make the round feel complete.

These are the points in the short form of EFT that we will be using. Gary Craig, the founder of EFT, uses this same short form in his EFT demonstrations and in the later EFT video series.

Additional tip: You can end repeated rounds at any point. You can start at the eyebrow or top of the head. You can leave out points, too. Remember that the energy system is connected; each point you tap resonates throughout the system. I also encourage you to learn to use your intuition early in your use of EFT.


Disclaimer: The information and emotional freedom coaching we provide is intended to educate, inform, amuse, and inspire you on your personal journey towards optimal health and a thriving life. It is clearly not intended to replace a one-on-one relationship with a qualified health care professional and is definitely not intended as medical advice, diagnosis, or treatment. If you are under the care of any health professionals (or should be), we strongly encourage you to discuss modifications in your diet, lifestyle, exercise program, nutrition, or use of EFT with them prior to making any changes, and never discontinue or reduce prescription medications without consulting your doctor or pharmacist.
Like
0 members like this

TapFest and EFT on the Radio

Thank you to all who tap each day at noon, for our global brothers and sisters. On top of our list right now:

Please hold space and tapping energy for those who continue to suffer in Syria, those rebPalestine and Jerusalem, the troubles in West Africa, the nuclear aftermath that continues in Japan, the slow rebuilding in the Phillipines, conflicts and refugee situations across the world.

There's never a lack of things to tap for! Worldwide conflicts affect us all, and displace millions.  Natural disasters such as tornadoes, hurricanes, floods and drought also abound, so keep them in your thoughts as well, please.

When we practice tapping with our global brothers and sisters, we ARE ONE.  Let's SHIFT, together, with one another on behalf of those who cannot - for whatever reason. Thank you!  You may simply want to tap for their grief, healing, and also for the chance to bring peace to themselves and others.  Here in the states, we continue to ask you to tap with us,  using our recent bombing and shooting tragedies in this country, in support of non-violent solutions and better mental healthcare! In times like these, we offer prayers, surrogate tapping and advocacy, using our power to change what is within our power to change -ourselves and one another.

Please post onto the Forum section your comments, requests and results.  With deep gratitude,

Everyday, at noon, wherever you are, please tap for someone else in the world.  Imagine, over 800 of us, tapping wherever we are, each day!  Imagine.... If you need help with how, or what to say, check out the resources files, above.

We are delighted to accept donations to TapFest in order to continue our efforts. Thank you!